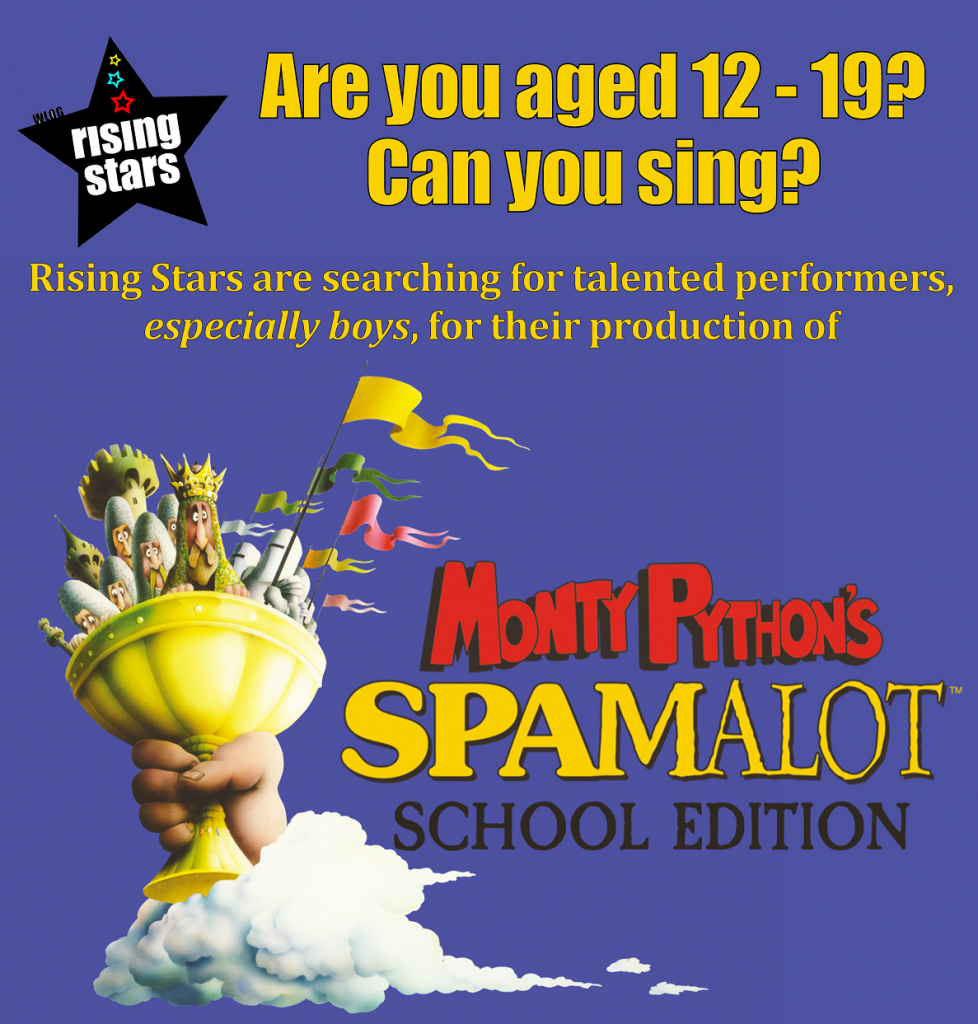 We are now taking bookings for audition slots for Spamalot.

To book your place, please complete and return an Application to Audition form.

Audition rehearsals start next Friday evening (20th September) from 7-9pm in the Blyburgate Hall, Beccles for anyone who would like to be in the cast as a principal and/or a company member.

Sunday 29th September, 2pm – 4pm
Company & principal audition practice / guidance and audition techniques
(anyone auditioning for Company only may leave at 3pm if they wish)

All rehearsals are in Blyburgate Hall, Beccles.

Don’t panic if you can’t attend all the pre-audition rehearsals as the character descriptions, audition pieces and rehearsal backing tracks can be downloaded from the Rising Stars’ downloads area for you to practice at home.

We look forward to meeting you at a rehearsal and hope you take advantage of this opportunity to perform with our friendly and talented group.

Less than a week to go until the Information Evening for Spamalot!!

The Information Evening will be held at 7pm on Friday 13th September in the Blyburgate Hall in Beccles, where there will be the opportunity to find out more about the show, meet the production team and get more details about how to audition to be in the cast or for a principal role.

If you can’t make it to the Information Evening but are still interested in being involved with the show, just CONTACT US and we’ll make sure all the information given out on the night is emailed to you.

We look forward to meeting you.

Don’t forget that this Sunday is the WORKSHOP – a chance to work with 3 amazing professional tutors.

Those who have paid in advance has been emailed the details.

There are still a few limited places left for anyone to turn up on the day but it is first come first served.

Anyone thinking about joining us for this exciting opportunity must arrive just before 10am at Blyburgate Hall bringing your form (which can be downloaded from here) and money.

We are looking forward to working with you

Lizzie Stanley will be teaching dance at the Rising Stars workshop

Lizzie has enjoyed a successful performing and choreography career since graduating with a 1st class BA Hons Degree at London Studio Centre.
Credits include Lead Female Dancer in UK and International Tours of Spirit Of The Dance, Pet Shop Boys West End Dancer, Ensemble in Singin’ In The Rain, UK tour ensemble in Emerald Storm and Ireland’s Call and featured Dancer for Dance East.
She has professionally choreographed and performed in for LP Creatives pantomimes Aladdin and Dick Whittington and has regularly taught, performed and directed on performances at The Marina Theatre. Lucy Fennell is an improviser, actor and director. She is a founding member of Impromptu Shakespeare and has toured with them nationally and for 7 years at the Edinburgh Fringe. She has appeared in BAFTA award winning series History Bombs and teaches improv and acting at Artemis Performing Arts College in Berkshire. 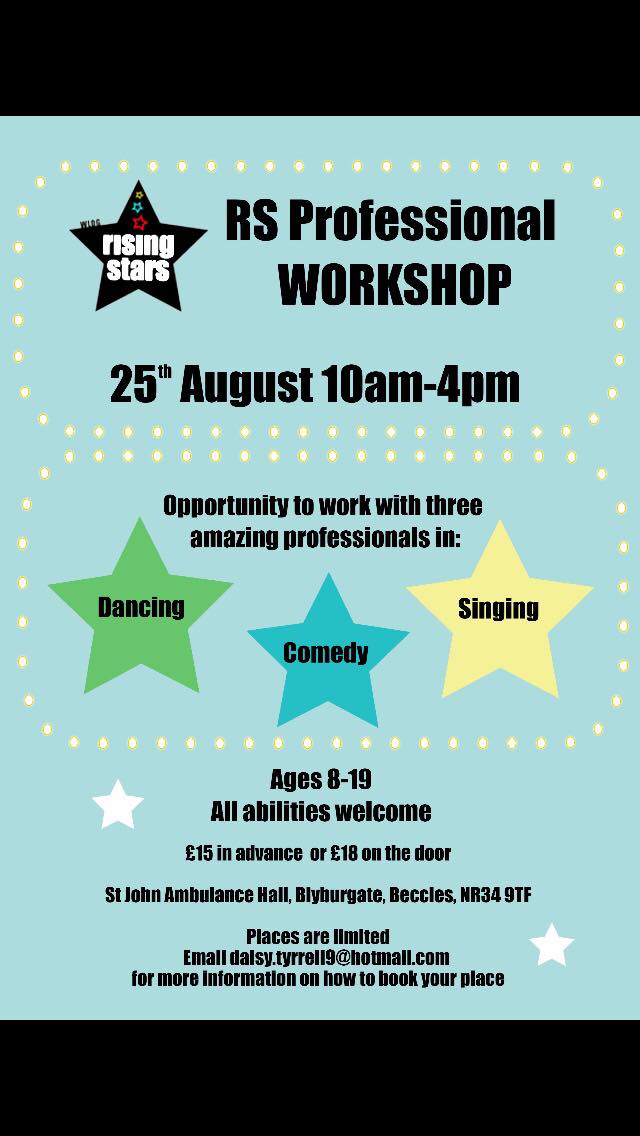 An amazing opportunity for 8-19 year olds to work with three amazing professional tutors to improve their stage skills.

Rising Stars at the Beccles Carnival

The sun came out just as the procession started and was well supported by people from the town and surrounding area.

Rising Stars handed out over 1000 flyers advertising the auditions for Spamalot.

Let’s hope they do the trick and we can welcome some new members into our friendly and talented group. 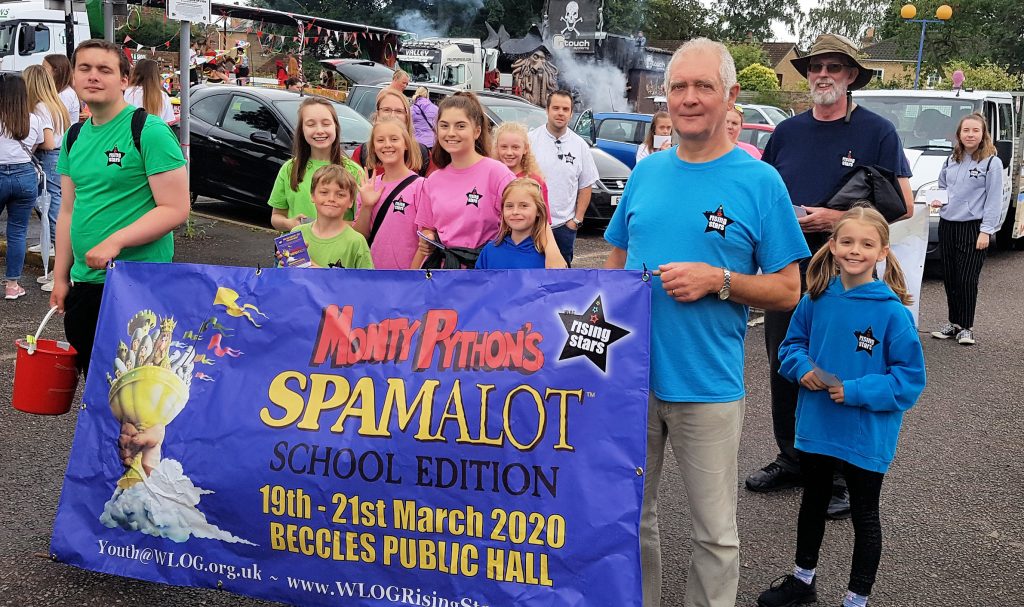 New Publicity Banner for The Evacuees and Spamalot

Keep your eyes peeled for our new huge advertising banner for both ‘The Evacuees’ being performed in a few weeks time and the auditions for our Spring 2020 production of ‘Spamalot’.

Shown here against the MD to give an idea of scale.
For more about The Evacuees and how to buy tickets, please click here 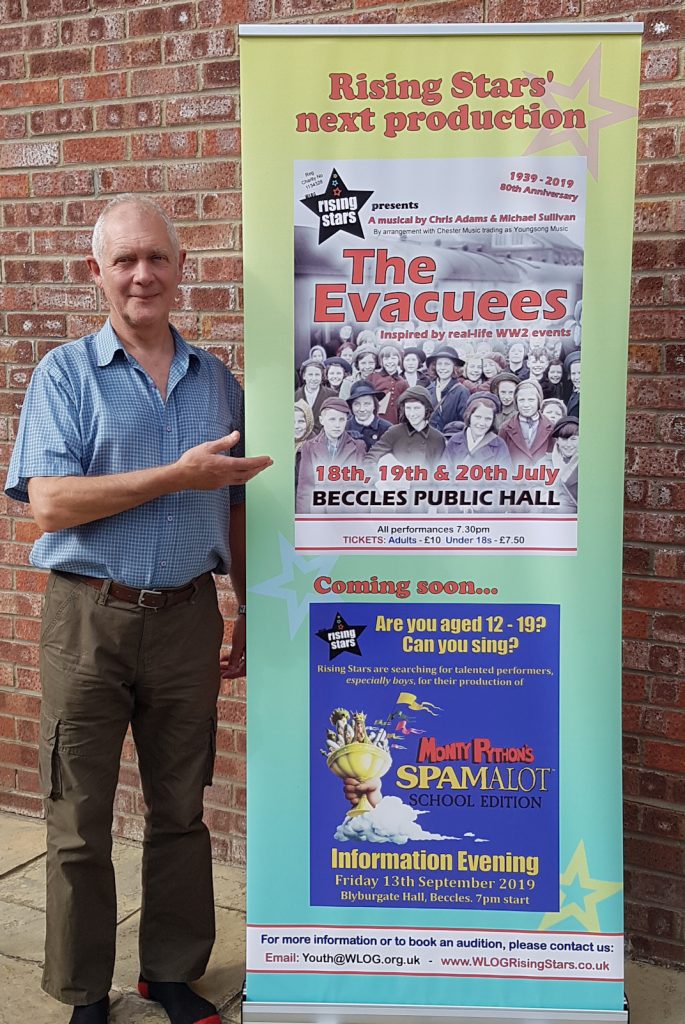 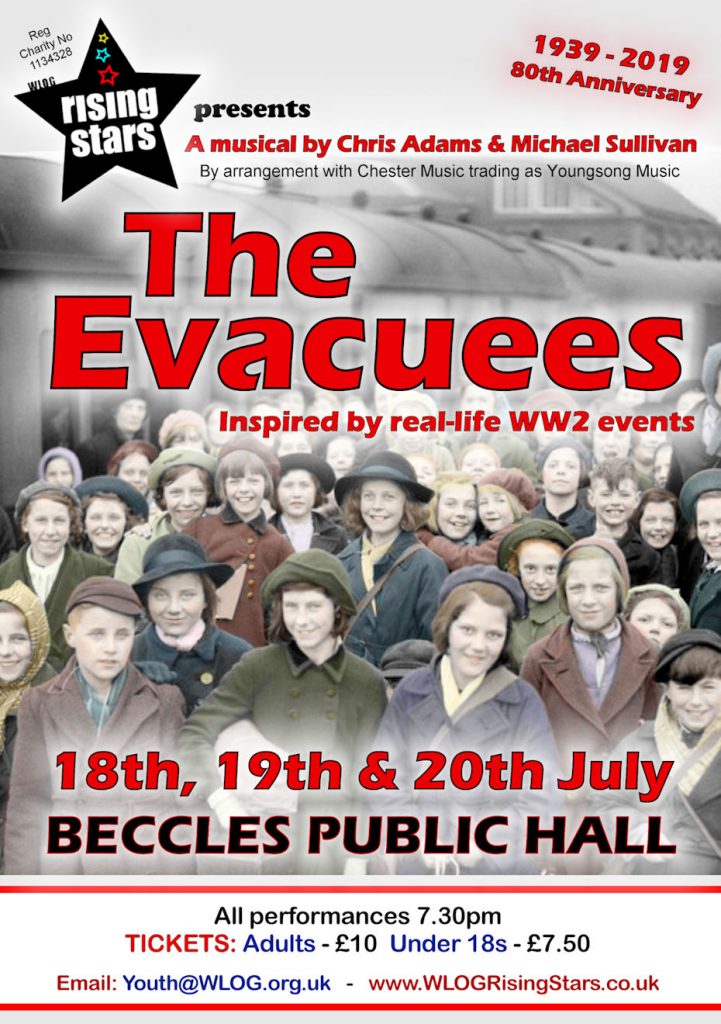 Information Evening for our next production

It’s your time to delve into history as Rising Stars start the search for the cast of their next fully-staged production. ‘The Evacuees’ tells the story of the mass evacuation of children from towns and cities at the start of the Second World War and has been scheduled to coincide with the 80th Anniversary of real-life events.

Rising Stars is looking for enthusiastic singers and actors between 8 and 19 years of age to perform in this fully-costumed musical. To launch the search, Rising Stars are holding an Information Evening at 7pm on Friday 26th April 2019 in the Blyburgate Hall in Beccles. The evening will give all prospective cast members the opportunity to find out more about the show, meet the production team and get more details about how to audition to be in the cast or for a principal role.

‘The Evacuees’ is the next fully-staged show in a long line of successful musical productions by Rising Stars, whose previous credits have included ‘Romeo & Juliet – A Rock Musical’, ‘Joseph & the Amazing Technicolor Dreamcoat’ and ‘Les Misérables’. The show will form part of wider commemorations in the local area to remember the events of 1939 and is not to be missed.

For more information on how to get involved with this exciting and talented youth group, come along to the Information evening or Contact Us